Shout Out To Memphis

Kudos to my main Memphis man, Billy Gibson! He won the blues industry equivalent to the Grammy for best instrumentalist-harmonica a little more than a week ago in Memphis. Well deserved for an extremely hard working musician trying to make a go of it in a difficult business. I've posted in regards to my relationship to Billy earlier and this award just validates my respect for the man. Can I get an AMEN! Go to the www.blues.org site for a complete list of winners.

Speaking of Memphis, my brother Rusty brought me a CD by some Memphis cats that go by the name Delta Highway. He and my Woodlands, Tx brother, Tim (and son Tanner) were in town for some of our Mom's gumbo. Rusty had heard them play at Mr. Handy's Blues Hall on Beale Street. I had heard of the band, but had not heard the band. 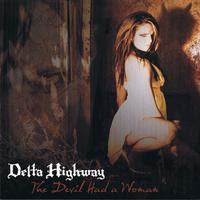 They gave him a promotional copy of their latest The Devil Had A Woman (without liner note info), so I had to stroll over to their website to find out about these guys. I had only listened to a couple of quick snippets long enough to tell that the harp player had some chops. When I read, though, that he (Brandon Santini) and the guitarist's (Justin Sulek)influences were John Popper and Stevie Ray Vaughan, I almost dismissed them. Don't get me wrong. Both Popper and Vaughan are tremendous talents. I have most everything SRV recorded because no one has ever played the blues with more soul than he did--too many try to duplicate that in the same way that some try to duplicate Little Walter. Popper just does not play music in my choice of genres.

Reading on, though, clued me into to the fact that both had found that the old school guys really had something going on and leaned on what they could learn there and blended it a bit with what they refer to as "High Octane Blues". Hmmm. Sounds like Blues/Rock, huh? And to an extent, you'd be right. What they really are successful at achieving, though, is a blend that is neither fish nor foul.

I've said before that Blues/Rock is not my cup of tea, but that is mainly because CDs in that category today stretch way too far away from the blues for me to consider it blues. The Delta Highway band incorporates a bit of the screaming guitar at times and some million note harp speed licks, but Santini and Sulek sprinkle them in like adding black pepper to a stew to make it tasty, but not to overwhelm the flavor.

The opening tune will fool you into believing that these guys are into a laid back groove with Santini's nicely played acoustic harmonica licks bouncing off some old school distortion from Sulek's guitar. Doesn't take much of 23 Hours to also prove that Santini's vocals are gritty enough for the blues.

The title tune ramps things up a smidgen (okay a lot) and we're given a harp and guitar ride, but things stay grounded in a blues context. Victor Wainwright's piano hammering are really a highlight of the tune. Oh, by the way, all the tunes are originals by Santini or he and Sulek.

They have quite a variety of grooves happening for anyone to label this Blues/Rock, actually. Funky Little Baby is a funky little tune with Santini's chromatic harp leading the way and a Westside Chicago guitar vibe from Sulek. For me, the deep harp tones make We Got A Thing Going On a favorite and Chris Stephenson's rhythmic organ shows up and swirls through the proceedings. Shake It Just A Little A Bit is a jumping harp work out and reminds me a lot of my good buddy Sonny Boy Terry's style. And that's kind of the way these guys work it and straddle the fence of the genres.

It is really apparent that both of these guys (Santini/Sulek) can shred on their instruments, but they choose to restrain themselves just enough to make this work for me. I hear more Billy Gibson than John Popper in Brandon Santini and like Billy, he knows how to keep it real. Anyway--I like these guys, someone has to keep it going.
Posted by Ricky Bush at 2:52 PM