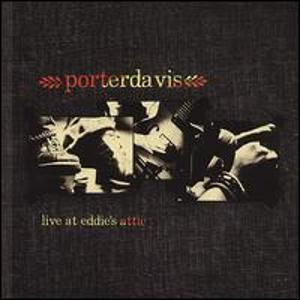 Prologue: I don't quite know what happened here. I wrote this back on May 29 and was sure that it was posted back then. Buuuttt-I was scroll through my list of posts on my edit list and there this was, but as a DRAFT. Meaning, that I had not posted it.

Oh, yeah, I love discovering talented bands who I've never heard of before, especially if they employ an harmonica slinger. Actually, I checked these guys out for two reasons. The first one came from a comment left on the Harp Attack post from Simon Wallace who mentioned that he had met Stephen Schneider at the Austin Blues Society fundraiser this past Sunday and his impressions of the Lone Wolf Harp Attack pedal. The second came from Stephen who passed along his impression that the band had a trio thang going on that came close to the Collard Green's and Gravy groove. That's all the information I needed to head on over to www.loveporterdavis.com and check them out for myself.

Didn't take long to get slapped with the fact that I've been sucking hind tit as far as knowing Porter Davis' music. The entire music community of Austin apparently knows the group well enough to declare them the Best Roots Rock band and hand their drummer, Mike Meadows the Best Drum award and then give Simon the Best Instrumental Miscellaneous for his harmonica playing. Seems that they also placed in the Best Blues Band, Best Band, Best Male Vocal, and Best Electric Guitar categories. Reminds me of when I witnessed the Band of Heathens opening for Kim Wilson, I kept asking myself, "who are these guys".

I'm not going to re-gurgitate any more of their website info here. The guys do remind me quite of bit of that Band of Heathens. They defy being categorized and that does seem to be a trend with a lot of young bands and it seems that's what appeals to a lot of young music fans also. These guys do it as quite a unique trio.

I think Stephen's Collard Greens and Gravy comparison comes a lot from the Smack You Back groove, where they turn Simon Wallace loose with his harp skills and similar to Ian Collard, he pulls in some nicely sustained fat notes with solid intonation and vibrato. His inventive lick vocabulary contains nary a cliche. Like Collard, he gets the blues harp to do his bidding outside of the standard format. Kind of sets the tone that this ain't no blues band--but then Dan Barrett's slide guitar gets Muddy Water's Can't Be Satisfied going and his vocals take on a blues timbre and Wallace jabs his blues harp licks out. But then--

They'll get you thinking Townes Van Zandt with their version of White Freightliner and then Barrett channels Cat Stephens and James Taylor and Dave Mattews and they slip back down in the alley with Robert Johnson's Come On In My Kitchen. The entire time Mike Meadows pops and bops a very individualistic percussive beat nowhere close to being played on your standard drumkit; even throwing down a bit of a solo on Come Closer and Wallace makes his harp fit into what ever direction the band takes. The interconnection between his harp, Barrett's guitars/vocals, and Meadow's strange percussive display makes this band work for me. By the way, there ain't no one named Porter Davis. Anyway--'nuff for now.
PS.--pardon the small pix of the album, but it wouldn't grow any larger for me.
Posted by Ricky Bush at 2:43 PM

salam kenal dari kami blogger pemula
your blog is ok...please visit to my blog
what my blog is ok too